The murder of George Floyd in Minneapolis sparked outrage in the US with hundreds of thousands of protesters, going out night after night in more than 40 cities.  And in Canada,  tens of thousands of people in cities and towns (there was a kneeling protest in Cheticamp, Cape Breton) protested racism and injustice toward blacks across the country.

Let’s look at Canada’s mainstream Jewish organizations’ responses and efforts to fight racism against blacks in the US, and perhaps more importantly in Canada.

First, take a look at the main page of Canada’s Centre for Israel and Jewish Advocacy.  While nothing is posted there, CIJA tweeted five lines (that is correct) which said “with great anger  & broken hearts, we denounce this hate.”  Perhaps too little, and too late.

Take a look at B’nai Brith Canada’s website.  Nowhere near the front page on their site is an article  We Must All Condemn Anti-Black Racism. It  asks  Jews to condemn racism.  While that’s a start, the article reveals not one example of racist attacks against blacks in Canada.   It mentions the murder of George Floyd, but the writers blames the protestors — not the police —  for “violent and destructive behavior.”

“dedicated to combating antisemitism and racism at home and around the world, and advocates for human rights issues spanning the civil, political, religious and cultural sectors.”

Have a look at the blog entry for the Canadian Jewish Record.  It too refers only to blacks in the US.  While noting the Jim Crow laws, Rosa Parks, Martin Luther King Jr., Selma, Alabama there is not  a word about fighting racism against black people in Canada.

What is a Jew to do when she wants to see a Jewish Canadian response to the racial hatred – primarily against blacks . 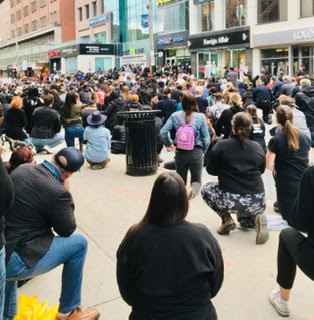 photos: featured above and here by Judy Haiven

This week has seen hundreds of demonstrations and rallies against police brutality, op-eds in every newspaper, full coverage by the CBC and the commercial TV outlets. One of the CBC’s own reporters was treated to police violence herself while covering the protests. On May 30, Susan Ormiston, who is white and a veteran senior CBC journalist, was hit with a rubber bullet and a gas canister while reporting at a demonstration against the police in Minneapolis. She was standing with her cameraman in an empty parking lot on the fringe of the protest. No outrage by the CBC; in fact they buried the news item.

Human and civil rights organizations one after the other has come out in support of the campaign Black Lives Matter – but B’nai Brith Canada’s, CIJA’s and the Jewish Record’s response has been disappointing, at the very least.

People have to turn to Independent Jewish Voices which advocates for the struggle against racism and focuses on blacks—who have doubtless suffered more aggression, maltreatment and police violence than any other minority group in the country. To find out what the major Canadian Jewish organization which fights for human rights – be it in Palestine or in Canada — does in support of Black Lives Matter see https://www.ijvcanada.org/canadian-jews-say-black-lives-matter/. 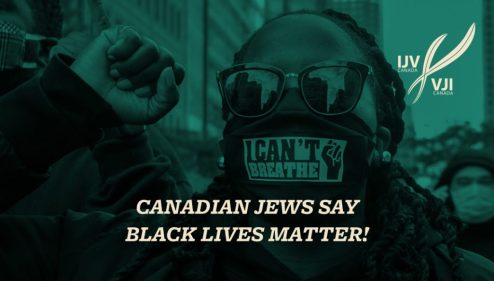