We’re experienced at being here in perhaps the richest region in Italy —  Emilia Romagna as we spent about 5 months in Bologna — maybe 10 years ago — while on Sabbatical. A region is equivalent to a Can. province.Today I can barely remember having had a responsible job as a university professor

I remember Omri having to go to high school, at the  Liceo Classico — even on Sat. mornings, which is the norm here. Well no more school for him– or for me. We went to what our tour guide Anna called a “typical town”, depressing in the rain — but the mascot of Felino  is  a pig.

They call the region’s capital city, Bologna, La Grassa (the fat one).   Great food  predicated on prosciutto and the wonderful Parmigiano cheese. We toured a large, family owned prosciutto plant, and also a wonderful  cheese farm with 500 cows.  The owner of the cheese plant and farm was proud to say there were no unions since mechanization meant he needed only 20 loyal employees.  Have a look:

The huge rounds of  Parmigiano weigh at least 50 pounds each, it takes 600 litres of milk to make each one. Banks here accept these wheels of cheese as collateral! There are HUGE warehouses of this cheese that underwrite  loans for farmers!!

Fantastic scenery.  The upper left castle is the Castello di Torrechiara.  The field was just outside our hotel room in Parma! 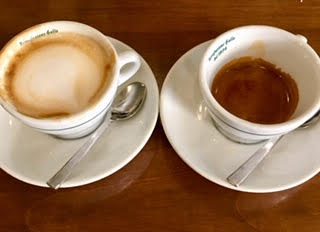 A cappucino for me and a cafe doppio for Larry, and at this cafe we joined two Australians and a Canadian from Kingston, Ont. at the Sat. market in Parma. Parma was the home to the Farnese family, of course aristocrats — the castle is a wonderful brick building hundreds of years old which now houses the regional galleries and art treasures: 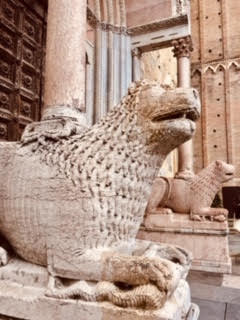 The statue of the Partisan fighter (WWII) has his back turned to the monarchy, so to speak. And that — said our guide– is controversial today, yet this statue signals the pro-socialist tendencies in Emilia-Romagna.  After all Bologna is called Red Bologna. …The two lions flank the main church in Parma. Here is a postcard of the church, and the octagonal baptistry in Parma: 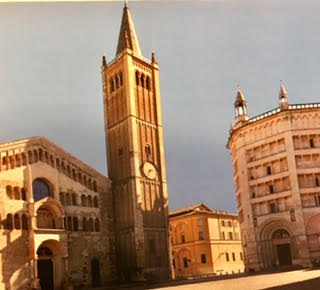 We’ve noticed few demonstrations, or posters for left wing demonstrations– which we used to see on lampposts and walls in this region.  In a way it’s upsetting.