We hear that Parliament is going to make changes to Employment Insurance to pay employees who are affected by the virus Covid-19. In the last few weeks we’ve seen that if someone is diagnosed with it, they must self-isolate at home for 14 days; the Undersecretary of Health in the UK is now in isolation, as are Prime Minister Trudeau and his wife. A daycare centre in Calgary has closed for two weeks because one child tested positive for the virus. The Mayor of Halifax is now in self-isolation; the mayor’s office is closed till further notice. In today’s press conference, Premier McNeil did not close the schools. He said public service workers who go abroad have to self-isolate for 14 days when they return. Within a week, I’ll bet McNeil will be closing the schools before March break ends.

Cruise ships are another matter that affects us in Halifax, Sydney and the rest of the province. At least one cruise ship operator has cancelled all its sailings for the next 60 days.  The rest have brayed that they have Covid-19 under control. Though the ships have redoubled their efforts to improve their hygiene—few holiday makers in their right minds would willingly get on a cruise ship today.   Still the cruise lines continue to sail, even though thousands have cancelled holidays. But should we let them dock in Halifax?   The average ship has 5,000 passengers from the US and around the world.   Even if half-full, 2,500 will disembark, go to bars, restaurants, go to museums, and travel in buses and taxis to Peggy’s Cove.   From May to October, more than 100 cruise ships dock at Halifax. That’s at least a quarter of a million tourists who will land here during the spring and summer season.

This chart (below) surfaced the other day in the New York Times. Some experts are telling us that by simply using good hygiene and hand-washing the number of cases can be kept at bay. While hand-washing is critical, the cases will still skyrocket. The sheer volume of cases could outstrip the capacity of our health care system. In fact, today, without major outbreaks of the Covid-19 virus — we already are over capacity in some emergency rooms, and there are few extra hospital beds due to the needs of acute care and chronic care patients. That has nothing to do with Covid-19. 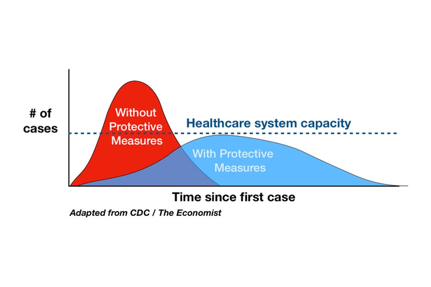 In terms of Covid-19, we are already seeing that the 811 help-line in NS is at over-capacity. Doctors won’t want Covid-19 patients coughing and hacking in their waiting rooms. Emergency care at the hospital will have to be triaged, if the number and severity of cases do skyrocket.

On the other hand experts tell us that using other protective measures could allow Covid-19 to build more slowly, yet stay in our communities for a longer time. We already know about the first line of defence: effective hand-washing and coughing into a tissue or a sleeve. Handshaking is out. But the real key to slowing down and “flattening the curve” (see above), is to keep by people further apart which makes transmission marginally less likely. This is called social distancing.

The notion of social distancing is catching on. We hear that sporting events, some theatres, conferences and large group activities have been cancelled. Even the national Juno Awards are cancelled. But NS’s Minister of Education Zach Churchill insists that all levels of schools remain open to students. Even after March break next week, when thousands of students travel with their families, often by airplane, Churchill insists all public schools, colleges and universities should be open to them when they return. We have 5,000 to 10,000 people on most of Nova Scotia’s university campuses. Every service and gathering place is open, including student bars, cafeterias, gyms and libraries. Halifax Transit continues to run buses all over Halifax – where people in varying degrees of health sit side by side for long or short rides. Riders don’t like the windows opened, since it’s still winter. But that means passengers get no fresh air. The city keeps our public libraries and pools open including cafes and children’s programs. In public spaces it’s almost impossible to keep the virus away.

The UK is not a good model of social distancing. Recently, Prime Minister Boris Johnson said “…many more families are going to lose loved ones before their time.”

Just a few universities are switching to online courses, rather than traditional lectures. However, everything is operating as usual – schools, trains, buses, planes.

The US, likewise, is not a good model for us. Trump actually believes a free enterprise spirit can chase away the virus. In the US there is woefully inadequate testing, and the testing costs the patient money. Schools are open, public spaces filled and it’s business as usual. Until it isn’t. Turns out Disneyland is closed!

Capitalism tries to separate us—and does a good job of it. The middle class usually doesn’t see the problems of the poor, and sometimes cares less. We have homelessness across the country at record levels. In Halifax-Dartmouth, nearly 250 https://www.homelesshub.ca/community-profile/halifax

people sleep rough or attempt to access a shelter every night. Across Canada, each month19,000 women and their children victims of male violence are denied accommodation at shelters.

People who have safe housing and jobs often believe they have little in common with the homeless, and the poor.

What will happen to the poor and homeless if they catch the Covid-19 coronavirus? In Martha Paynter’s excellent op-ed here she points out that for many prisoners the disease will be fatal. This is because there are not the facilities, the hospitals on site, or the doctors seriously monitoring the prison population. NS nursing homes have just announced no visitors except for close family who have not travelled in the last two weeks. This is to try to curb the spread. At the start of Covid-19, a Chinese restaurant in Sydney put up a sign that excluded diners who were Chinese. Embarrassed by the media attention, the owners decided to close the restaurant for a month. Now though they have apologized for their racist practice, they still refuse to re-open the restaurant. Our NS Human Rights Commission has not stepped in. After all, no one made a formal complaint. On the streets of Halifax, I’ve heard the virus is caused by foreigners. But Covid-19 is a world wide pandemic. We hear about case after case of people who test positive without any connection to anywhere but here. That is what a pandemic is.

We social activists want to unite people; we want to work with others to change our world for the better. It’s a contradiction I know, but at this time the best thing we can do to prevent ourselves and others from getting sick, and minimize deaths is to practice social distancing.   Cancel those meetings; don’t go dancing (as I did last weekend); don’t enjoy the library; don’t go to movie theatres or to markets. Don’t travel. Remember the diagram of the tall curve versus the flat curve. Remember that European countries including Italy, Ireland, Malta, Norway, and Poland have closed all schools as a precaution. France, Portugal and Spain have closed some but not all schools.

British expert in public health, Prof. John Ashton insists that the community has a huge role in helping others during these times and excoriates Boris Johnson’s homilies as too little and too late.   “What the government should have been doing over these last weeks, which they’ve thrown away, is to encourage neighbourhoods, communities, supported by the local public health directors and a joined-up NHS.

“They should have been encouraging people to have their own family plans about how they will maintain the family show on the road, who will be taking the kids to school, how do you entertain them in the Easter holidays? They should have been much clearer, sooner, about making it clear that people shouldn’t be travelling so they could cancel their holidays and get their money back on the insurance.

“They haven’t done any of that. Who’s going to look after elderly people – stop them having to go out, do their shopping for them? People should have been doing that planning – they should have been pointed in that direction by the government. There’s been no discussion about that at all.”