KJIPUKTUK (Halifax) – Yesterday’s Taking Back the Streets with Joy was a celebration of African-Nova Scotian Youth and the Black Community.

Some 100 people came out to the steps of the Halifax police station on Gottingen Street on a windy and cold Sunday afternoon.

Some brought signs and the children present made signs on the spot which called on people to be kind to others and to love their community.  The kids also used chalk to draw slogans and pictures on the sidewalk. 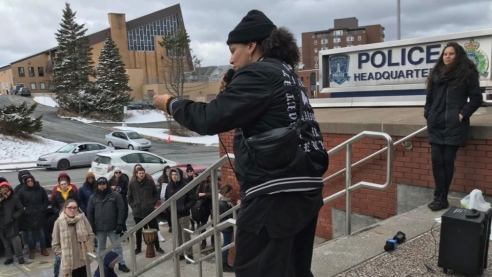 (photos above courtesy of CTV/Twitter)

There was no obvious police presence –or deterrence.  The cop shop’s front door – labeled ‘open’ – was tightly shut and barely a person walked in or out during the rally.  The two other front doors of the station – labeled ‘closed’ told the real story.

Reverend Britton, standing at the top of the steps, asked if the crowd knew what HRP stands for?  She said, “It does not stand for Harass Racialized People!” to much applause and amusement.

DeRico Symonds, sat on the step with the microphone.  He challenged the crowd to imagine if Santina Rao (the African Nova Scotian mother beaten, arrested and charged by the Halifax police while shopping at Walmart) had actually stolen the grapefruit, two lemons and a head of lettuce, which she was accused of stealing.

Those groceries cost less than $3.00.  Even if she had lifted them (which she did not), should she have been tackled  by cops, have her wrist broken, get a black eye and a concussion while her two children looked on?

Symonds demanded that the police act “professionally.”  Symonds said that over and over again the Halifax police act unprofessionally when they confront Blacks – especially young Blacks —  yet no one says anything, they get no punishment and in fact are allowed to act exactly as racist as they they like all the time. He told the crowd to imagine if any one of them acted unprofessionally at their job,  time after time. That person would not keep their job.

But the police not only keep their jobs – they get promoted.