Whither the NDP? Part III: the NDP as Enablers

This week we’ve seen one group lobby the NS Human Rights Commission (NSHRC) to take away the well-deserved NS Human Rights Award from Rana Zaman.  On International Human Rights Day (Dec. 10), Zaman received the coveted Individual Human Rights Award because, according to the NSHRC, she is “….an award-winning social activist who volunteers on several boards and works at the grass-roots level with marginalized communities.  She collaborates with individuals, families and communities to address issues such as poverty, systemic poverty, sexism, racism, bullying and other human rights issues.”  The NSHRC goes on to say, “Rana is driven with the desire to see unity and solidarity amongst all communities during a time when divisiveness and negative rhetoric is on the rise.” 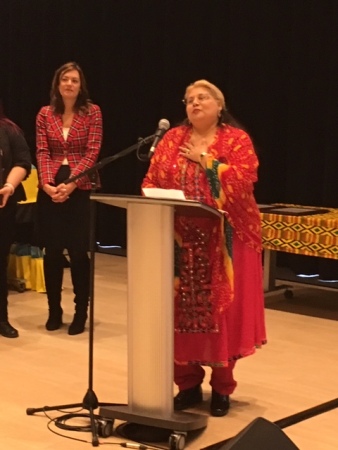 However the lobby group, the Atlantic Jewish Council (AJC), does not agree. The AJC wrote a nasty Community Update in an effort to revoke Zaman’s award.  In addition, two rabbis in Halifax have penned a vitriolic letter to the Chronicle Herald which also demands the NSHRC rescind the award it gave her barely one week ago.

their letters to the NS Human Rights Commission and the Herald, referred to the  NDP  dumping Zaman as their candidate for Dartmouth-Cole Harbour.  The rabbis  claim she was pushed aside because “comparing  Israel to Nazi Germany was deemed to be racist by the NDP.”  When the NDP ‘discovered’  Zaman’s year-old tweets which condemned Israel for killing hundreds and maiming thousands of “unarmed Palestinian protesters” shot during the Great March of Return in 2018, the NDP dropped Zaman as a federal candidate.

Melissa Bruno, then the national director of the NDP,

called the tweets “unacceptable” and “anti-semitic.”  Though Zaman’s comparison was a clumsy response to her revulsion against Israel’s shootings at the Gaza border,  her response was not anti-semitic.

The fact that Zaman apologized immediately and publicly for any harm her tweets caused the Atlantic Jewish Council, the wider Jewish community and others, her apology meant nothing to her detractors.  The NDP still unceremoniously booted her out within hours of calling her out on the tweets.  The AJC and the rabbis are using the fact that the NDP revoked her nomination as proof of her being an anti-semite.  What irritates the AJC and the rabbis is the fact that despite being removed by the NDP, Zaman continues to criticize Israel for it’s brutal and illegal occupation of Palestine.  The AJC wrote in their Community Update that Zaman “regularly makes public statements about Jews and Israel that are anti-semitic.”  Is this true? Is Rana Zaman an anti-semite?

For one considered opinion, have a look at King’s University journalism professor Stephen Kimber’s response to whether or not Zaman is anti-semitic here: http://stephenkimber.com/can-we-talk-about-israel-and-the-palestinians-no/

Here’s my opinion:  The NDP is quick to shoot first and ask questions later.  The fact that Rana Zaman dared to flag Israel as “Apartheid Israel” puts her in the company of  former Israeli prime minister Ehud Barak,  Jimmy Carter (former US president), Meir Dagan (former head of Israel’s Mossad), Michael Ben-Yair (Israel’s former attorney general) and many other leaders and scholars.  Neither she nor they are anti-semitic.

Zaman’s  rejection of the International Holocaust Remembrance Alliance (IHRA) definition of anti-semitism does not mean she is anti-semitic.  Many organizations, including Independent Jewish Voices Canada, do not support the IHRA’s definition because it privileges Jews and is a threat to freedom of expression. The IHRA definition does not even attempt to make common cause with racialised groups including Muslims and African-Canadians. In fact 7 out of 11 examples used in the IHRA definition have to do with denying the right to criticize Israel.

The Atlantic Jewish Council writes that the NS Human Rights award “…should be reserved for individuals who consistently defend against racism in all its forms…” The NS Human Rights Commission and its partners made a very good choice to give the award to Rana Zaman—she has met all the criteria. 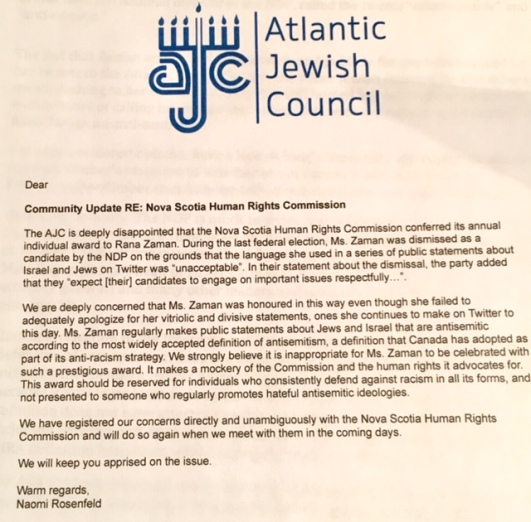 AJC letter on left (not), and the Rabbis’ letter on right (that’s for sure)

But who really started the campaign to demonize Rana Zaman? It was none other than the NDP.  Zaman, an immigant from Pakistan, a racialised person and a community activist was not good enough for the NDP, though she won the nomination for the federal seat.  The NDP’s slander about her being unacceptable and an anti-semite was picked up by the Jewish establishment.  I think the NDP has a lot of explaining to do.