Women as Targets for Men’s Rage

Maybe what comes out of the Montreal Massacre – 30 years later is this: women are targets for men’s rage.

No matter what women do, or women say – women who stand up to men, or say no to men or confront men (whether actually, or potentially or symbolically) become targets.  Of course shooting women, or killing them with knives or cross-bows is extreme.  Still it happens.

Back to 25 year old Marc Lépine in Montreal on that snowy Dec. 6  thirty years ago.  Before he opened fire, Lépine shouted: “You’re all a bunch of feminists, and I hate feminists!” One student who survived, Nathalie Provost, protested: “I’m not feminist, I have never fought against men.” Lépine shot her anyway. 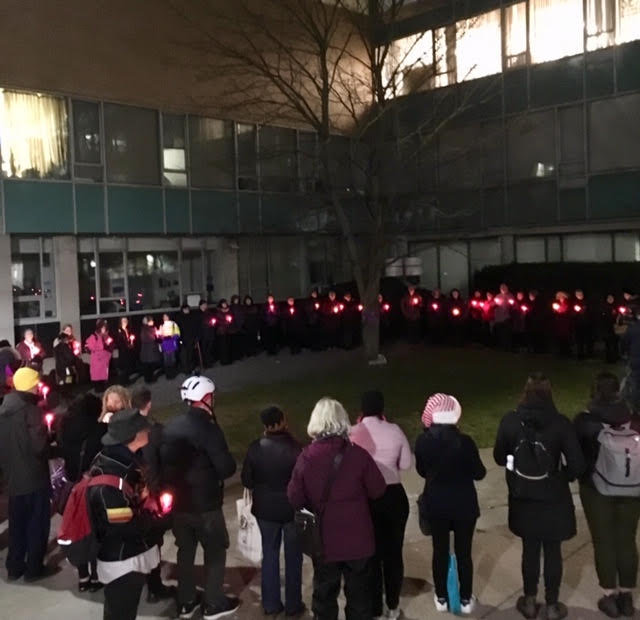 Halifax commemoration of Montreal Massacre 6 Dec. 2019: at the tree to the 14 women victims, at the Engineering Building at Dalhousie University.

What this shows is that women – even if they don’t openly challenge men — are seen as the enemy by misogynists, and “incells” and many other men.

They say women have come a long way. What the last three decades of “progress” have delivered are that even today between 2 and 3 Canadian women are killed by their intimate male partners every week of the year.

In divorce, women suffer declines in their household incomes, their standard of living and often lose their housing— in comparison to their ex-husbands.

Women are still a long way from easily obtaining abortions in two out of three Maritime provinces.  Health Canada, in its 2016-17 Annual Report, wrote that New Brunswick’s lack of coverage for abortions “remains a concern.”   PEI refused to provide abortions at all  until 2016, when the government allowed a clinic to open.  In PEI, medical abortions are restricted to the first 9 weeks; surgical abortions are allowed only until 12 weeks and days.

In the last 20 years, the wage gap between men and women has shrunk by only 5.5%.  On average, men earned 18.8% more than women in 1998, and only 13.3% more in 2018.  It still means women make 87 cents for every $1 that men do. Women have barely made a dent in the struggle for equal pay for work of equal value (also known as pay equity).  Pay equity has all but fallen off the negotiating table when trade unions bargain and legislated pay equity is in retreat. The federal Liberals promised childcare in their budget as far back as 1993, and 26 years later too many women cannot work, or attend school, because there is a paucity of affordable childcare right across the country (except for Quebec).

While women suffer from out and out discrimination, in terms of earnings, jobs and opportunities, men continue to act as their gatekeepers and their bosses, both at home and at work.

The fact is that even speaking openly about rebelling against men, against husbands, against fathers, against bosses – can be dangerous.  Maybe not a capital offence, but an offence nonetheless—with often violent repercussions.

Thirty years ago, the media – taking its cue from the police — ignored the message in Lépine’s suicide letter.  The media in English and French Canada insisted Lépine was a crazy man—that the fact that the14 murder victims  were women  meant little.   Francine Pelletier, was and is still a leading Quebec journalist who was herself a target of Lépine when police found his  “annex” –his list of feminists he had planned to kill –had he had more time.  Thirty years ago, Pelletier  agreed that Lépine’s actions were  highly political and that he knew exactly what he was doing that Dec. 6.

“I always felt those women died in my name. Some of them probably weren’t even feminist,” Pelletier said, “they just had the nerve to believe they were peers, not subordinates of their male classmates.”