What to Read, What to Watch….

Vivian Gornick is a New York based writer. She first came to my attention 30 plus years ago when her book The Romance of American Communism was published.  It is her best and most inspired book — all about the “fellow travellers” Communists of the 1940s and ’50s. Her book about her relationship with her mother and the past is also worth reading.  Fierce Attachments.  Her newest book, The Odd Woman and the City:  a memoir is excellent, but not as political or incisive as the American Communism book.  In the Odd Woman, Gornick walks the streets of New York, anywhere and everywhere, and eavesdrops on conversations, witnesses violence of cops, sees all the goings on in NYC — and describes them.  She also tells about relationships she’s built with writers and artists, and those are very lively and interesting. All the books are at the Hfx library.

Ever heard of the Bechdel Testfor films? Many of you have.  The Bechdel Test measures how seriously women are treated in primarily US films.  The test requires the film has to have at least 2 named women in it– who talk to each other about something other than a man.  Well I just saw The Irishman on Netflix.   Though parts of the film are pretty good, overall it fails the Bechdel Test and more.  This Scorsese film is the story of Jimmy Hoffa, warts and all.  And the disputed story of his disappearance (murder) in the 70s.  Not that his disappearance is contested, but no one is talking about how and where he died.  The acting is pretty good, but like most American films, the actors are encouraged to over-act sometimes.  The story about the union and its goodwill  is weak and not very exciting (compared to the reality of some unions) and the role of women is absurdly portrayed.  If you’re not too tired, it can keep your attention — just barely.  And did I talk about gratuitous violence? Well it’s very evident. 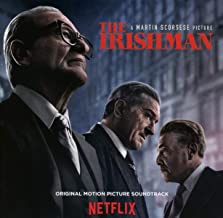