What to Read; What to Watch

A great novel is Canadian Mona Awad’s latest, Bunny.  This is a shocking and still humorous take on the scholars and scholarship of  women in  Master’s program in creative writing at a nearly ivy-league university.

Samantha, from the “other side of the tracks”, joins four young privileged white women in a seminar course. They call each other “Bunny” – in tones of endearment which gets subverted to control.  What happens veers from sorority pranks, to a cult-like friendship, to something that ultimately crosses “the line”.

Samantha’s only friend, Ava, is a woman who is university drop out—who urges her to do the same.

The cast of characters includes the oh so serious professors, including a man called the Lion, and a woman who just wants everyone to hold hands and get along.

Awad’s earlier novel, 13 Ways of Looking at a Fat Girl, was angrier and more defiant than this one. It is excellent too.  But Awad’s writing, and plot really carries Bunny, to its rather unsettling ending.   Both books are in Halifax library.

Just watched Unbelievable on Netflix.  Unlike most policiers, this one is well written and surprising.  The script is strong and written by my favourite novelist couples, Michael Chabon

.   At first this series seems like a straightforward tale of Marie, a 15 year old girl is raped, and  police pressure her to say it never happened.  Then you see more great acting, including the put downs of the cops, and two “good” police women who decide to pursue a rapist they can’t even name.    The story about Marie weaves in and out of the series, in a believable and volatile way.  You won’t stop watching till the end. 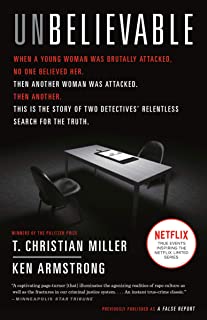 Without  sentimentalizing or infantilizing the victims, and without painting the cops as saviours – this series is unique. Highly recommend it.