Ten years ago, this week, Tanya Brooks was brutally murdered, her body left in a window-well of St Patrick’s-Alexandra School, in north end Halifax.  The window well is grisly a two foot by 6 foot concrete coffer, four feet below the school pavement.  On Friday it was littered with cigarette stubs, shreds of paper, and pop cans. The now abandoned large school building is a site of broken windows, boarded up doors and overgrown grass and litter. 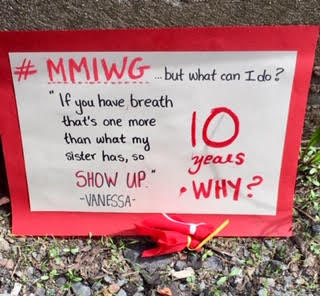 Brooks, aged 36, originally from Millbrook First Nation near Truro, was mother to 5 children; she was also a sister, a daughter and a friend.

Last Friday, on the 10thanniversary of her death, about 75 people walked from the Mi’kmaw Native Friendship Centrethe two blocks to the now shuttered public school.  Vanessa Brooks, Tanya’s younger sister, led the march and the tribute.  She spoke eloquently about her sister and her family, and the fact that Tanya’s death was yet another tragic case of  MMIWG – Missing and Murdered Indigenous Women and Girls. 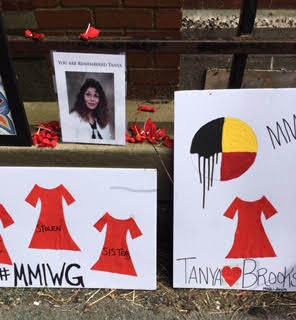 APTN (The Aboriginal Peoples Television Network) has made a three season series called “Taken.”  It details about 30 cases (out of more than 1,000) of missing and murdered Indigenous women. Episode 13 of the 1stseries features the life and death of Tanya Brooks.

One might well ask what the Halifax police have been doing about this case. Somehow despite the police offering a $150,000 reward for information leading to the arrest of the killer, no one has come forward to claim the reward.  The police maintain despite having no leads, the case is still “open”.

One wonders how quickly the police would have moved to find the killer of – for example — my daughter-in-law.  Given recent reluctance by the Halifax police to end street checks and apologise for their racism, race likely played a role in their unforgivably slow investigation. Since the murder was a decade ago, the trail of the murderer must be cold by now.

Halifax’s incoming police chief, Dan Kinsella, has his work cut out for him. Not only should he declare a permanent halt to street checks, and apologise for the police force’s past racist behaviour – Kinsella also has to make a serious effort to solve the murder of Tanya Brooks.