Charting a course for the future of feminist organizing 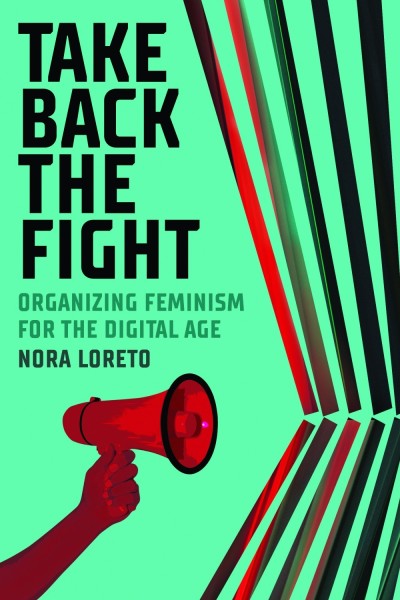 Take Back the Fight: Organizing Feminism for the Digital Age by Nora Loreto, Fernwood, 2020

In reading Take Back the Fight: Organizing Feminism for the Digital Age, it dawned on me how important feminist and socialist voices are. Nora Loreto puts that front and centre in her new book.

These voices are also missing in many of today’s discussions among radicals and the left. And if not missing, they’re often shunted to the side.

Loreto, a writer and activist based in Québec City, has a firm grip on the significance of feminism today, and provides a useful look back at some of the better days of the women’s movement in Canada.

She also warns us about taking too rosy a view of the past, and her skepticism and critique of bourgeois feminism is sure to keep readers on their toes.

Loreto explains that because Canada is built on genocide and settler colonialism, “white supremacy… racism and oppression are woven throughout society.” She notes that progressive movements are not immune to these three threats.

Though the book’s historical chapter is rather linear, it is still fascinating. It’s as if Loreto tosses a pebble into the water, causing ripples to form on the surface. Rather than writing about the pebble itself, she writes about the ripples. And that’s a good thing. She looks at organizations that are complementary to the feminist movement, but which—when added together with it—become a much more powerful force.

In the first couple of chapters, Loreto takes on the rise and fall of important organizations such as the Knights of Labor (a workers’ federation active in the late 19th century), the National Council of Canadian Women, the suffragettes, and the National Action Committee on the Status of Women, founded in 1971 to pressure the Canadian government to implement the recommendations of the Report of the Royal Commission on the Status of Women in Canada.

As a specialist in industrial relations, I hate to admit there are only two points I remember about the Knights of Labor. The first is that they accepted women as members (unlike many of the other unions of the period) and that they had more than 60,000 members in Canada and more than three million in the United States.
Loreto’s research reveals that in the London Advertiser of October 1886:

Members of the Order raised “their hands to heaven and pledged themselves that wherever women were employed, they would demand equal pay for equal work without regard to sex whatsoever.”

I also knew that the Knights of Labor were committed to building literacy in the working class, but I had no idea that their reading list included Karl Marx, Samuel Taylor Coleridge and Charles Darwin. The list also contained books on the “woman question” and feminist lectures and advice on domestic issues such as child-raising.

Some unique insights about feminism appear in the sixth chapter, titled “Disseminating Feminist Knowledge in the Digital Age.” Loreto explains how the internet holds much of our collective understanding in one place, but to be useful, it has to challenge the status quo, allow debate, and confront power.

Loreto claims that Twitter (and presumably other social media networks) fails to deliver. She looks at educators such as Egerton Ryerson in the mid-1800s, who promised a new form of education not based on religious texts. Though parts of the education system and teacher training seemed progressive for its time, Ryerson still believed that white and Indigenous children could not be taught together. He supported the concept of residential schools and believed that, “the North American Indian cannot be civilized… except in connection with… not only religious instruction and sentiment but of religious feelings.”

For example, she writes convincingly about trigger warnings, which are often ridiculed and mocked by the right. As Loreto notes:

Triggering people has become an express goal of the far right, in Internet campaigns that seek to harass and silence activist voices.

She asks how well trigger warnings work, and how they can be used so that everything doesn’t result in being labeled “triggering.” Loreto cites Black anti-racist activist and scholar Roxane Gay who says that though trigger warnings might be “ineffective [and] impractical,” at the same time they are necessary.

Loreto notes that when feminist knowledge, debates, teach-ins or exercises are hosted on various university campuses, they become warped when debates move online. In the digital sphere, few are held accountable for sending sexist or racist memes, so the internet can be an inherently unsafe space for women and for feminist movements more broadly.

In the subsequent chapter titled “Ad Hoc Organizing in the Digital Age,” Loreto explores recently organized “women’s events” such as the 2017 Women’s March. Though the event began in the US, in Canada more than 120,000 people marched in 38 cities across the country. Yet, Loreto asks, what came of it? In fact, one of the march’s organizers, Penelope Chester Starr, didn’t think of the event as a political moment:

Saying that it’s not a protest was important. As a team, we banned the P-word from our vocabulary because we want to be constructive… This was not meant to be a political or politicized event.

Loreto argues that without demands, organizations and social movements can’t go anywhere—and organizing events is not the same as building a women’s movement. Here she quotes famous abolitionist Frederick Douglass, who remarked in 1857, “If there is no struggle there is no progress.”

Loreto analyzes what went wrong with the Women’s March, and what could have been done differently. Had the leadership been more diverse, and not hitched to the US organization, or if it had managed to link to the struggle of missing and murdered Indigenous women and girls, and used seasoned activists as mentors, the outcome could have helped build a new national network or roundtable of feminists with clear demands—and ideas crucial to building a movement.

Another missed opportunity was evident a week after the first march in January 2017. A white gunman killed six Muslim men at prayer at the Islamic Cultural Centre of Québec City. Dozens were injured, some very seriously. Yet the following year, in 2018, the organizers of the Women’s March did not try to make common cause with the widows of the six slain men. The organizers did not relate to Islamophobia and hate-based crime, or gun control which should be a special priority for all women. This showed that the marches were not in sync with wider feminist objectives.

Take Back the Fight also highlights leadership in the digital age. Loreto warns any wannabe leader, “prepare to be doxed” (the act of publicly revealing previously private personal information). She also points out that in 2013, there was a near-plurality of women leaders of Canadian provinces, but by 2019, they were all gone. What happened?

“Politics happened,” writes Loreto. She notes that when someone is on display, they become a target—and it’s “getting worse” for Black, Indigenous, racialized, non-binary and trans women, all of whom bear the brunt of the abuse. She reports on the high level of hatred by men against women in politics such as former Alberta Premier Rachel Notley and Catherine McKenna, Trudeau’s environment minister for the first four years of his government. McKenna was dubbed “Climate Barbie” in a widely condemned tweet from Conservative MP Gerry Ritz, and worse, because she was blonde and active in her portfolio.

In the final chapter, “Mainstreaming Anti-Capitalist, Anti-Racist Feminism,” my personal favourite, Loreto slices into corporate feminism and the patriarchy. She asks, importantly: how did feminism get so sanitized? And then answers:

Transforming feminism away from its radical roots and towards the current incarnation today as corporate, individualized feminism has been the Right’s most powerful weapon to spay the effectiveness of feminist movements. Corporate feminism is the antithesis to radical feminism.

She blames initiatives such as ‘Lean In’ as little more than posturing, and blames Liberal politicians like MP Maryam Monsef, who are “heavy on awareness” but provide little concrete action against femicide (a woman in Canada is killed every 2.5 days, and women are five times more likely to be murdered by a current for former spouse); precarious housing; access to affordable childcare; lack of easy access to abortion; reduced help from agencies, shelters, and mental health experts; and the segmentation of the labour market—based on gender and race—which means women still earn 87 cents for every dollar men earn. Women are also concentrated in low wage or part-time jobs in the service industry, light manufacturing and retail work.

On a final note, Loreto explores the pandemic, who it has impacted most, and how. Though this was written at the start of the crisis, she correctly predicted what is going on now, with the racialized and poor suffering far more than most white Canadians.

With Loreto’s solid research, journalism and activism, she manages to investigate what’s happened to the feminist movement and demonstrate what it will take for it to become a major force in Canadian society. This work could not be more urgent.

Judy Haiven is a retired professor of Management at Saint Mary’s University in Halifax. She is on the steering committee of Equity Watch, an organization that fights against discrimination and bullying in the workplace. Check out her social activism blog at judyhaiven.ca