What to Watch, What to Read!

Lately I’ve watched My Brilliant Friend, on HBO.  This is a wonderful Italian series, which is subtitled in English, with 8 episodes.  I’d first recommend reading the Neapolitan Quartet — four brilliant novels by Elena Ferrante.  She is a mysterious novelist who was born and raised around Naples, Italy.  She uses Ferrante, but it is a pseudonym and despite the tremendous success of the four novels — starting with My Brilliant Friend — no one knows who the author is.

Of course if you just want to watch the HBO series, that’s OK but leaves quite a bit out. It takes place in a very poor suburb of Naples. Italians live in 4 storey tenements, some without bathtubs and modern kitchens. Families have so many children that the kids end up sleeping on camp cots in the kitchen. The buildings surround a parkette, with not a blade of grass or a tree.  The series begins in the late 1950s when two 8 year old girls — Elena (called Lenu) and Lila — start a friendship that will endure for six decades.

Turns out Lenu and Lela are amateurs –not trained actors.  Their acting, and that of their families and teachers is spell-binding. I won’t spoil this series for you — but you must read/and-or watch it.  More seasons are coming up, and I can’t wait.

Wild, Wild Country is a fantastic roller-coaster of a documentary that is as good as a drama. 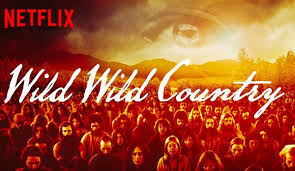 It details the Rajneeshi movement, which migrated from Pune, India to rural Wasco County, Oregon in the early 1980s.  The cult brought thousands of followers, mostly well off American, British and Australian white people. Among them were doctors, dentists, accountants and lawyers. The Rajneeshis bought more than 64,000 acres near a town called Antelope. 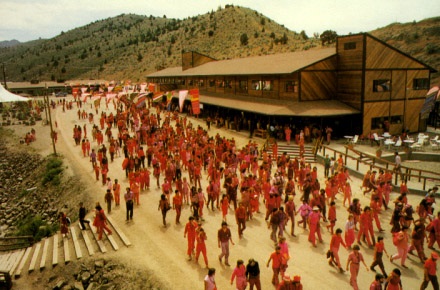 Once there the adherents (all dressed in red) built a whole community with comfortable apartments and homes that looked like ski chalets, swimming pools, shops, a dental and a medical practice, huge halls, kitchens, a farm and more. Their spiritual leader and founder was Bhagwan Shree Rajneesh,

later known as Osho. His inner circle contained two women, an Australian housewife who left her family to move to the US with Osho, and Annan Sheela, Osho’s his personal assistant 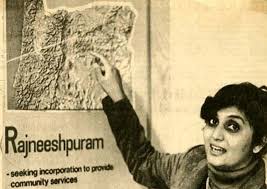 who was really the inspiration and organiser of the movement.

The 43 townsfolk of Antelope hated the Rajneeshis from the start. But pay-back time came when the cult members decided to take over town council, and rename the town Rajneeshpuram. Much intrigue followed. I don’t want to tell you how it ends, but here is a speech by Osho (before he died in 1990) https://www.youtube.com/watch?v=ga1kFBN50Vo.

Just finished Into the Woods, by Tana French. 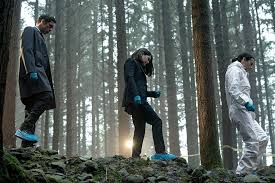 I didn’t like it quite as much as I did The Witch Elm (https://judyhaiven.ca/2019/10/29/what-to-read-2/). But her books are about young people – falling afoul of adult ways. And that I find beguiling. Into the Woods (another 600 page tome) is about Rob, a 32 year old man who falls into a job with the Dublin police’s murder squad. But Rob has a big secret which you learn early on in the novel which he has to conceal because of his work on a murder investigation. Here and now you’ll never guess what the secret is. The fun of the book is that you know the secret early on but it all falls into place much later in the novel.   This novel will take you far away from where you are in the here and now. For that it’s worth reading it.

In the New Yorker there is a fabulous article called When America Tried To Deport its Radicals by historian and author Adam Hochschild.

In the same year (1919) that the Winnipeg General Strike was turning labour relations in our country upside down – something similar was taking place across the US.

In what were called the Palmer Raids (after the US attorney-general under President Woodrow Wilson) thousands of socialists, leftists, activists, and trade unionists were deported from the US. What led up to the deportations? Fear of the Bolsheviks who had just won the revolution in Russia, fear of “Asian” immigrants, fear of trade unionists, who were demanding better working conditions and wages and becoming militant.

One of the US government’s strongmen was J Edgar Hoover (yes the same slimey bastard who became head of the FBI) who personally incarcerated none other than the infamous Emma Goldman. By this time, Goldman had lived in the US for 34 years! On the night she was deported, this exchange took place:

“Haven’t I given you a square deal, Miss Goldman?” Hoover asked, as they steamed toward Brooklyn in the darkness. 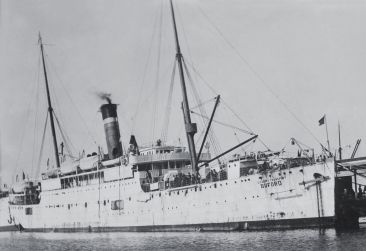 “Oh, I suppose you’ve given me as square a deal as you could,” she replied, two hours away from being ejected from the country where she had lived for thirty-four years and found the voice that had won her admirers around the world. “We shouldn’t expect from any person something beyond his capacity.”

Don’t miss the pleasure of reading this  article which is here.