Crown Attorneys on Illegal Strike Fight for All Nova Scotians

By Judy and Larry Haiven  first published today in NSAdvocate.org

KJIPUKTUK (Halifax) – One hundred Crown attorneys are on strike and are picketing at the Nova Scotia legislature. We have seen this before. In 1998, denied even the right to join a union, the prosecutors went on an illegal strike. Their nervy challenge won them right to arbitration, which prevented strikes for over twenty years.

In 2016, in return for Crowns agreeing to a modest three per cent wage increase over four years, the government agreed to continue arbitration for thirty years

But now the government has ripped up the arbitration agreement and unilaterally replaced that with a bogus “right to strike,” which declares Crowns an “essential service,” and renders any work stoppage ineffective. 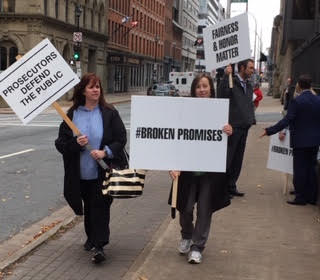 The government is now seeking an injunction which would declare current picketing illegal and make any defiance by prosecutors a contempt of court. Then fines and even jail terms could follow. We hope that the Crowns continue to engage in civil disobedience, defy any injunction and challenge the government’s grim tactics.

The irony of the government using the brute force of the law on professionals who enforce the law cannot be lost on anyone. 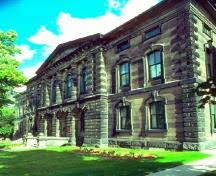 This is all part of the provincial Liberal government’s cynical and malevolent strategy to deal with labour in general, a strategy they have been employing since the day they assumed office. That strategy is illegal and arguably immoral. But it is temporarily effective. And it revolves around the adage “Justice delayed is justice denied.”

As in all jurisdictions in Canada, Nova Scotia’s government has a dilemma when it comes to workers on the public payroll.

The Supreme Court of Canada has ruled that for workers the right to strike is a fundamental freedom protected under the Charter. Governments can remove the right to strike but only if they replace it with a reasonable alternative dispute resolution process which approaches what could be achieved in free collective bargaining. That alternative is arbitration.

Given the Charter, here’s the dilemma: The government hates both options. They don’t want strikes. And they don’t want arbitration. They want the ability to dictate the terms and conditions of employment, full stop. 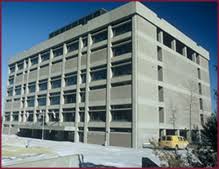 And here’s how Nova Scotia’s government is trying to solve that dilemma: They have made it impossible for public sector workers to go on strike effectively. Unions must provide “essential services” at a rate so high that striking is meaningless. That is not a reasonable substitute for the right to strike.

The government’s solution will very likely not withstand a Charter challenge. As we have seen in several provinces so far, including a teacher’s dispute in British Columbia, the eventual court ruling will cost the government and taxpayers more than it was hoping to save by outlawing strikes. But here’s the rub: By the time the court challenges wend their way up the system, years will pass and a different government will have to sort out the mess

Why should we be concerned with a small group of 100 lawyers whose salary starts at $65,000 a year and who are the agents of a legal system that is often so brutal to the lives of the poor, the indigenous, and other marginalized people?

Because if the government can act so high handedly to them, if it can act with impunity toward a relatively privileged group, then it can do it to everyone else.

It’s good to see some group drawing a line in the sand.Crown