As I flip through the Facebook photos from the climate demonstrations across the country, there is one group missing from the photos. 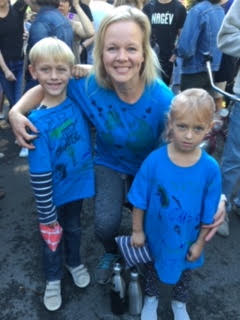 Above:  Halifax mother and her kids, they made the t-shirts themselves.

Trade unions are missing.  In Halifax, there were no flags, banners or signs from the unions.  Someone told me one union, the PSAC  (Public Service Alliance of Canada), was there – but from my corner of the protest, I didn’t see them. 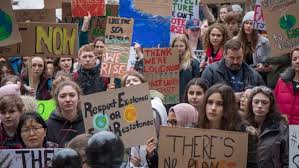 In a way, it is not surprising.  For years right wing and centrist politicians have publicly taunted and attacked environmentalists by stacking jobs and job security, against the environment.  It started with the oil companies’ (and the unions’) tone-deaf defense of the environmental degradation caused by Alberta’s tar sands. It spread to other corporations and unions whose members are part of the “extractive” industries.

To be fair, some of these industries have been hit hard.  The continuing low price of oil means big layoffs for oil workers, especially in Alberta and Saskatchewan, and those who work in the  spin-off jobs.  More than 3,000 forest workers in BC are out of work. Seventeen pulp mills have closed – 4 permanently —  due to a crash in lumber prices, and US import tariffs.  The BC government has given $69 million  to help the industry provide early retirement and job retraining.

But on the other hand, in a decade or two, climate scientists and activists tell us little will be left of the world as we know it today.

We Want Everything is a lively sometimes ironic novel about the 1969 strike of tens of thousands of workers at the Fiat auto plants throughout Italy.  In the book, the workers were approached by students who made space at the universities for discussion, debate and strike meetings.  The students accessed campus mimeograph machines to run off leaflets which the workers and students distributed at factory gates. In the late 60s and 70s there was the idea that students and workers shared common cause in rebelling against the old and making the world a better, more equitable place.

Neoliberalism put an end to that world.  Former British Prime Minister Margaret Thatcher said, “There is no such thing as society: there are individual men and women, and there are families.” At the climate protests we saw a lot of young people, grandparents, and families– but beyond groups of students and student clubs, there were barely any “societies” such as trade unions.

It seems unions en masse decided not to join the climate demonstrations. 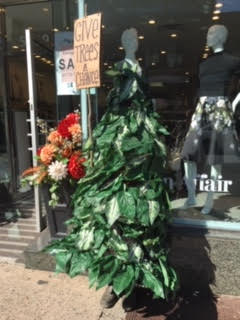 Sure, many trade unionists have to work on Friday, and can’t just walk off the job.  But unions employ scads of full time “servicing staff” or “reps” who usually process grievances and carry out collective bargaining. The union presidents, and their executives could have directed them to drop their chores, go to the climate march  and bring banners with them.  Clearly this was not done.

It’s not just individual unions that didn’t participate – but what about the myriad of labour federations, starting with the Canadian Labour Congress (CLC)? The CLC boasts it represents 3+ million Canadian workers.  The page on their website says it stands in solidarity “with [the] student-led Global Climate Strike.”  At the end of its press release, the CLC warns that “Not all workers will be able to join the marches and rallies in person… [but] those who do join the strikes should first speak with their union and consult relevant legislation to understand the legal implications of their actions.”

Really?? That absurdly cautious approach by the largest trade union centre in Canada is not exactly a ringing endorsement of climate action.  With this kind of backhand support, why would unions affiliated to the CLC bother with the march?

Here’s a different story from across the country. 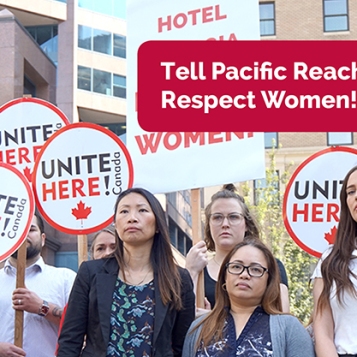 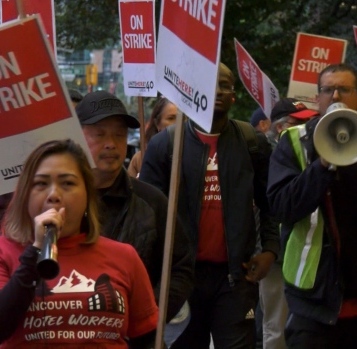 Cleaners, room attendants, chefs, and other staff at three upscale hotels in downtown Vancouver have been on strike for more than 10 days.  On Friday, outside one hotel, a young man I know was handing out leaflets in support of the striking workers.  Hundreds of climate activists who were returning from the march drifted by and not one took a leaflet.

Clearly those activists thought they had no common cause with the hotel workers.  Despite doing something radical such as being at a climate strike, the activists felt no empathy for striking hospitality workers.  The environmentalists  wouldn’t even take a free leaflet to read about the strike.

There’s a disconnect between workers and environmentalists – and no one is trying to bridge the gap.  Warning:  It is widening.