This is the 13thweek that protests are taking place in Hong Kong. Since the CBC has one reporter in Beijing and one in Hong Kong, they report on the protests every night – live on our TV news.

What started out as a single demand to kill a bill that would allow extradition of miscreants to Beijing, it has now morphed into other demands including one for “fully democratic elections” for the one-time British colony.  Though Hong Kong’s Chief Executive, Carrie Lam, has now rescinded the extradition bill, she insists she will go no further in political reforms.

Every night what Lam calls “radical protesters”  throw Molotov Cocktails,  corrosive liquids and bricks at the police.  The protestors set fire to institutions, mob the subways and airport, and set barricades on fire. 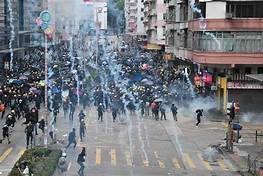 In the last two weeks, Hong Kong police have fired more than 1800 rounds of tear gas.  Police shoot water cannons filled with blue-dyed water to stain demonstrators in order to make them more visible to authorities.

Internet sources claim eleven have died as a result of the protests, with four of them taking their own lives for reasons that are unclear.  Virtually no one has been seriously injured.

Compare the Hong Kong situation to Gaza where there have been thousands who have protested every Friday for the last 74 weeks. Do Canadians know? Has there been weekly coverage on the CBC or on any media outlet?  Far from it.

However, 17 months ago, on 31 March, 2018, Palestinians in Gaza launched the Great March of Return.  The people of Gaza – who live in what Noam Chomsky and others call the largest open-air prison in the world– decided to peacefully march to the border fence with Israel. Their demands are an end to the 12 years’ siege of Gaza, and the right for refugees to be allowed to return to their homes.  Every Friday for 74 weeks, tens of thousands of unarmed Palestinians march to the border with Israel to stand there. The IDF (Israeli Defense Forces) have shot, killed and maimed thousands of these civilians. More than a dozen medics,  including Dr Tarek Loubani, a Canadian doctor from London, Ont., have been injured.

(above) Ibraheem Abu Thuraya: an Israeli airstrike took his legs in 2008, and took his life in 2017.

To date, Israeli snipers have killed more than 220 Palestinians, 43 of whom were children.  With live ammunition, the IDF shot and injured 6300 Palestinians; more than 120 of whom had have had limbs amputated as a result.  Subscribing to an “open-fire policy”, Israeli-fired tear gas canisters have smashed at least than 1600 people in the head – killing dozens.  In the last year, Israeli airstrikes have destroyed 30 Palestinian homes and damaged more than 500.

The CBC and other mainstream media has got behind the “little guy” in the David and Goliath story of Hong Kong vs mainland China.  Especially in the first weeks, the media was rooting for the students and families who wanted “democracy” for Hong Kong – meaning resistance to Chinese “Communist” authorities.

But what of Gaza?  There was not one instance in which the Canadian media empathized with the hundreds of thousands there who demonstrated peacefully for their rights.  The destruction of Gaza and its population was dropped from the news because our media’s pro-Israel bias is so ingrained that they do not need to be told what not to cover.

Why is that?  How, in all conscience, can the Canadian media stir the sympathy pot for Hong Kong and totally ignore the genocide going on in Gaza?

One clue is the backlash of the pro-Israel lobby in Canada and the US.  More than one  producer at the CBC  has said that every time they run a story on Gaza, the backlash from Centre for Israel and Jewish Affairs (CIJA), “Honest Reporting” and various other right-wing media is so intense,  it is “not worth it.”

Also there may be the little issue of race: like many people in Canada, I grew up with the media’s portrayal of Arabs (read Palestinians) as violent, knife-wielding and backward. On the other hand, Israelis were portrayed as cultured, western and exemplified by Paul Newman in the film Exodus.  For decades Palestinians and all Arabs have been labeled terrorists – you just need to look at the false arrests, and the incarceration of many Arab-Canadians (and many more Arab-Americans) in the wake of 9-11.  Hamas is labeled a terrorist organization, but it’s been the elected government of Gaza since 2006.

What we have is an abject failure by the media and frankly Canada to grapple with the contradiction in front of us right now.  The continued coverage –cheered on by the media — about Hong Kong’s rebellion against mainland China, versus the near absolute media silence about the tens of thousands who continue to stand up to what the UN has called an illegal and brutal occupation of Gaza—now in its 75thweek.

The Israel and Palestine issue is the “third rail” of Canadian politics. Touch it and you will be electrocuted.  Better, then– as far as the media is concerned —  to give it a wide berth.