What to watch– what not to watch

Watch a 1951 film, Bellissima.  This is an excellent film by Luchino Visconti. It has English subtitles.  The lead actress, Anna Magnani, is astounding.  It’s about life in a poor suburb of Rome. Cinecitta, the major movie studio in post-war Rome has put out a call to find a pretty 6-8 year-old girl for a starring role in a new Italian film.   Magnani is the mother of exactly such a girl and sees stardom — or at least acting in films — could be a way of helping her daughter escape from her mother’s drudgery and rudderless life.  The acting in the film is good; Bellissima  moves quickly and we see the poverty of working class life in post-WWII Italy.  We also see the violence and anger visited on Magnani by a brutish husband who wants absolute control over his little family and wants nothing to ever change. The message of the film is about mother’s desperation to ensure a better life for the daughter and for herself.  At the end however, the Visconti’s message is dispiriting and sexist. 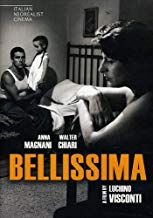 The film’s in black and white — what a treat. You can borrow it at the library. Or watch it here online for free  anytime.

Don’t rush off to watch When We Leave (2010).  Despite the cover of the DVD looking rather optimistic I have to tell you it’s a film about degradation, family rage and violence.  Most of the film takes place in Berlin.  A young woman and her son escape a vicious husband/father in Istanbul to make a new life in Germany.  The woman, Umay, grew up in Berlin so she and her child fly there to live with her parents until she can get a job and a place to live.  But she has to continue to flee, now from her own family, who want her to turn the 5 year old over to his father.  Umay refuses.  There is a level of fear and desperation in this film

which will bring the viewer way down.  True the acting is great.  But of course — the violence is the watchword in both the husband’s and her own family. And of course the families are Muslim.  In these times it is particularly hard to see anything that singles out Muslims as violent or backward. It fits into the Trump tropes and messaging around the western world which is Islamophobic. You can watch for yourself but I wouldn’t recommend When We Leave. I got it from the library on DVD.