At least 30 activists gathered with chants and signs in front of the Black Cultural Centre in Cherry Brook today. 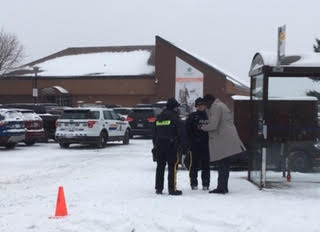 Security was tight for Trudeau today

They were protesting Justin Trudeau’s visit to the African-Nova Scotian community. It was nearly 3 weeks ago that more than 150 young people from across Canada were invited to Parliament Hill for Black Voices on the Hill. Black Voices on the Hill was a day for African-Canadians to meet eight federal MPs. Organised by the Federation of Black Canadians, the event was touted as part of the “democratic process,” and meant to encourage dialogue and participation.

Instead, a government employee complained to security, the Parliamentary Protective Service (PPS) about the young people’s visit, took a photo of the group and called them “dark-skinned people”. As they were about to have lunch in a Parliament cafeteria, a member of the PPS told the delegation to leave.

When the young people returned home, they held media conferences in Halifax, Montreal, Ottawa, Toronto and Vancouver to expose what had happened to them and they demanded an end to racial profiling at the federal level.

Though some tepid apologies trickled from the Speaker of the House, and the Chief of Staff to the Director of the PPS – the African Canadians’ demand to meet with the Prime Minister and the Speaker was turned down.

That is until today. Nearly three weeks later, the Prime Minister who came to Halifax to attend a Liberal fundraiser, attended a hastily organized meeting where he was to apologise to the African Nova Scotian young people and the wider community.

However, the PPS is not some two-bit low-wage security contractor such as Paladin or Gardaworld. The PPS is a trained, equipped and professional service which lists its core values as P.R.O.U.D. P is for professionalism, their website claims they adhere “to the highest ethical, legal and moral standards and obligations.” R stands for Respect. O stands for Objectivity – again from their website– “free from bias, fair and void of external influences. U is for Unity, D is for Democracy – “open, transparent, engaging and supportive in protecting the democratic processes of Parliament.”

Somehow these upstanding security personnel never thought twice before ejecting 150 African-Canadians who were invited guests at the Parliament Buildings during African Heritage Month.

Whatever Trudeau said today at the Black Cultural Centre it was likely to include soothing words and platitudes. This is par for the course since it’s an election year, and since the PM has been in the spotlight these last weeks because of the SNC-Lavelin affair. But think about this: in the same way the PM has hung former Attorney General Jody Wilson-Raybould out to dry as he continues to deny he or his staff ever pressured or harassed her, the PM has now glided through a staged apology to the Black community—3 weeks after the most humiliating incident of racism ever seen on the Hill. It’s too little and too late.