First published in the NSAdvocate.org

KJIPUKTUK (Halifax) – What is the point of the city declaring downtown Halifax’s Schmidtville a Heritage Conservation District when hundreds of houses in the area are at risk of cracking, shifting and even falling apart?

Wednesday’s soaring heat brought out demonstrators from the Schmidtville neighbourhood, which includes Dresden Row, Birmingham, Clyde, Brenton and Morris streets.  They protested the powerful blasting by developer WM Fares who is building a residential tower on the corner of Clyde and Brenton streets. Demonstrators included an octogenarian life-long resident, several retirees, young professionals who live in Park Victoria, the adjacent apartment building, and condo-owners from the Trillium on South Park St. 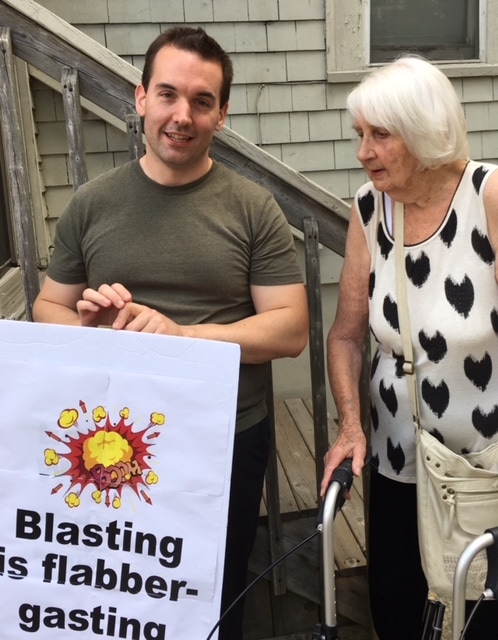 The strong blasting takes place five to ten times each day and the vibrations can be felt in houses, apartments and even while walking along the streets.  Vibrations and shaking can be felt on the upper floors of the new Central Library. Fares did meet with some residents and gave them a choice: power hammering to break the rocks for his building’s foundation, or blasting.  It’s Hobson’s choice – or no choice at all. It seems the developers are entitled to build and to disrupt and the residents are entitled to bear the consequences. This is social dumping – the rich and powerful are allowed to take away local residents’ right to quality of life.

It’s not just the one developer and one building.  It’s been five huge excavations for buildings over the better part of 10 years – including the Central Library (but because it is a wonderful place and a ‘public good’, Haligonians were willing to put up with that inconvenience).

But why should local people have to put up with more excavations and blasting so some rich guys can get richer?   Residents’ concerns include cracks in their buildings’ foundations, excessive noise, cement mixers and heavy trucks rumbling up and down the very narrow streets of Schmidtville, well into the evenings five days a week.   Afterwards, the historic jewel of Schmidtville is left in a canyon – surrounded by tall, expensive buildings.

Schmidtville residents, who fought for over a decade for their community to be recognized and preserved, are expected to sacrifice their quality of life on the altar of profits for developers and a city hall which tends to give in to most of their demands for variances, for private roads, for truck parking or for ‘extras’.

The affordable housing is supplied by owners of existing old buildings in Schmidtville – not by the developers.  Statistics Canada reveals that the neighbourhood has a median individual income of $25,500 — which means rents in the older buildings have been affordable.  Schmidtville and the surrounding apartment buildings constitute one of the densest areas of the city –rivaling the density of Manhattan.

Homes, small storefronts, apartments and cottages dating back to the mid 1850s and 1870s make Schmidtville’s built heritage of special significance to Halifax. A mere two weeks ago, Halifax Regional Council unanimously passed a motion to declare Schmidtville a Heritage Conservation District.  Yet what is it all worth if city hall does not protect the community from developers whose blasting and relentless construction and street-obstruction damages the historic buildings.  Fares and other developers have a wanton disregard for the local owners and tenants and think nothing of destroying their quality of life.