About 400 people, overwhelmingly female. attended the second annual Women’s  March in Halifax. Our turnout was about the same as the one in Rome, Italy which has about NINE TIMES the population of Halifax.  The speeches were not given by politicians, unlike last year where the mayor (among other ‘dignitaries’ ) spoke.  Mayor Savage must have used the fact he wasn’t asked to speak this year to avoid attending altogether.  I also saw no city councillors or MLA’s, or MPs.  I stand to be corrected if one slipped by my eagle eye. 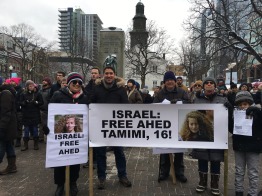 Canadians, Arabs and Jews for a Just Peace, plus Independent Jewish Voices – Canada and No Way to Treat a Child (UNJPPI) were the organizations that made the banners and carried the signs.  One of the hosts of the day, Rana Zaman, read a short speech about why the crowd should support Ahed Tamimi a 16 yr old girl who has been  jailed — with no bail — for slapping a soldier in the West Bank.  Look at my earlier posting for more on Ahed Tamimi.

This was a great day, I saw women of all sorts, plus children come out.

Also Liane Tessier (see https://judyhaiven.ca/2017/12/13/liane-tessier-and-discrimination-at-halifax-fire-service/) spoke eloquently about the need for oversight of employers in Hfx and NS on issues about equity.  She and I are starting Equity Watch at a public meeting this Thurs. 25 Jan. at 6 pm at the Central Library Halifax.